Unless you’ve been living under a rock, you’ve probably heard that childhood obesity is at an all-time high.  In 1972, only 5% of  those between the ages of 2 – 19  in America were considered obese.  By 2008, that rate had climbed to almost 20% (and most experts agree that kids aren’t getting any skinnier). 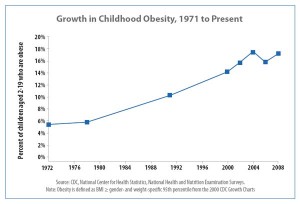 It’s estimated that over $100,000,000.00 is spent each year on campaigns to educate and to help prevent the steady rise in obesity for all ages.  All this money is spent under the guise that it’s cheaper to prevent obesity than to pay for the poor health of an obese population.

But is it working?

Spending on obesity prevention has steadily increased, but so has the obesity rate.

I’m not a health care provider, nor do I claim to be one.  But common sense tells me there are three ways to prevent obesity.

So, as a marketer what would you do to encourage and promote a healthier lifestyle?

The Fun Theory, a group that believes you can change behavior by making things fun, decided to tackle the challenge of getting people to take the stairs instead of the escalator.  Here’s what they did:

No multi-million dollar budget.  No red-tape.  No hoops to jump through.  They went straight to the heart of the matter; they made the stairs more fun (and more appealing) than the escalator.

Now for the tough questions….about you!

– Are your customers bored with your solution(s) and turning to a more “fun” alternative?

– Are you engaging customers with more than just facts and figures? (Both the stairs and escalator will yield the exact same result – either will bring you up or down, but The Fun Theory decided to use the stairs to engage peoples’ emotions.)

– Is your product, service, or organization worth talking about?

Here’s how to enter:

The person with the “most” creative idea will win an iPod Shuffle.  The winner will be selected by a random panel of judges, and notified via email (announced on October 1, 2011).  This contest is only available to those living in the United States or Canada (sorry to our international readers).